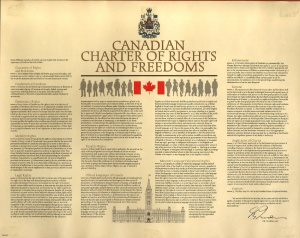 Many of the reactions to Stephen Harper’s loss are treating his reign as Prime Minister as the great exception in Canadian history. Some variation on how Harper does not represent “Canadian Values” was a staple of social media. The restoration of the Liberal Party, under the banner of a Trudeau no less, is being treated as a return to the natural order of the nation. Order has been restored, peace and good government to follow.

Yet in spite of his many transgressions over the past decade, more than 5.5 million Canadians came out to vote for Harper in this recent election. Another 800 thousand more voted for the Bloc Quebecois, which aped Harper’s Islamophobia. It is remarkable that nearly twenty per cent of Canadians appear to be so un-Canadian in their values that they were willing to not just voice support but actually cast a ballot for such parties. Are the values of more than six million Canadians, un-Canadian values? What does that make them then?

END_OF_DOCUMENT_TOKEN_TO_BE_REPLACED

Human Rights after 1945 in the Socialist and Post-Socialist World

Histories of late twentieth century global change have focused on its perceived winners on a macro-scale: democratic capitalism, global markets and individual rights. In such formulations, the “socialist world” and its history appear irrelevant to understanding global processes and unable to inform liberal Western democratic societies.

END_OF_DOCUMENT_TOKEN_TO_BE_REPLACED 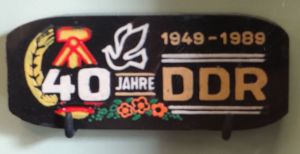 Had it survived the collapse of state socialism, the German Democratic Republic would be commemorating its 66th anniversary today. A month before the Berlin Wall came down in 1989, the GDR held a massive celebration for East Germany’s the 40th year as a separate country. By the next year, politicians from both East and West worked together to make sure the GDR ceased to exist on October 3rd, in part to avoid the awkwardness of reaching 41.

Twenty-five years later, as the unified Germany dominates the political and economic landscape of Europe, alternatives to this status quo seem unthinkable. While the continued existence of the GDR has recently been the subject of no less that three speculative novels, contemplating such an idea is usually geared towards parody and humour.

When we talk about German reunification, it is important to remember that the country created in 1990 looked very different than that sought as the division of the two Germanies was being formalized in 1949. In Western political posters from that year, the Christian Democrats (CDU) and the Social Democrats (SPD) both clearly supported the return of all lost territory in the East including that annexed to Poland and the Soviet Union in 1945.

Left: It should be the whole of Germany. For an undivided fatherland through the CDU. Right: Forwards, SPD for a free Germany

Into the 1960s, the Committee for an Indivisible Germany, a group supported by the West German left and right alike, produced propaganda material calling for the return return what was then the Western half of Poland as well as Kaliningrad. 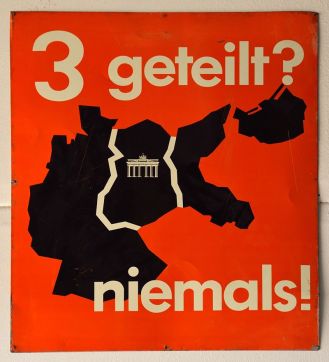 By the 1980s, the idea that reunification would include lands beyond the Oder-Neisse line that separated the GDR from Poland had moved to the margins. There was, however, enough discussion of the idea to inspire this graffiti in Jena mocking demands for a return to 1937 borders.

“We demand: Germany with the borders of 1254! Naples remains ours!”