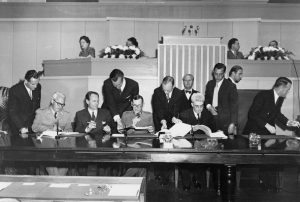 State Socialism, Legal Experts and the Genesis of International Criminal and Humanitarian Law after 1945, 24-26 November 2016

The conference programme is now ready: check it out here

For more on the “1989 after 1989” project at the University of Exeter of which this is a part, check out our website

It seemed like a good idea at the time…

If you spend enough time on social media, you start to get a sense of what is going to be popular. Take something sensational that pushes people’s buttons and confirms their deepest pre-existing beliefs. Give them some ammo for their self-righteousness. Or just put up a cute animal. Or all of the above.

I try my best to avoid doing this. I work on the history of East Germany and post historical facts and photos daily, often on material that can be very emotionally charged. When it comes to historical posts, I do my best to hold back on editorializing or adding inflammatory commentary.

Then came last Friday. I was on the road going to a conference still up in the middle of the night and saw the Daily Mail’s now infamous “Enemies of the People” headline denouncing the High Court for their decision on how Brexit will proceed.

This year a man shouting 'death to traitors' assassinated a British MP. Now Daily Mail prints photos of judges over 'enemies of the people'. pic.twitter.com/uYUzZsLKkA

I found this to be objectionable and not just a little bit proto-fascist. Normally I avoid making comparisons with Nazi history, but it immediately brought to mind the famous cover of the Illustrierter Beobachter with the header “Volksverräter” or “traitors of the people” listing those whose citizenship was being stripped in 1933. Not the same thing, just eerily reminiscent.

Shortly after midnight, after a quick google image search for a scan of the newspaper I decided to post the two images side-by-side just stating what they were and calling on readers to compare and contrast. I wasn’t prepared to go so far as to say the Daily Mail were actually fascist, but I wanted to point out where this sort of extreme thinking can lead to. I hadn’t really thought it through too carefully, more just a middle of the night reaction to something troubling in the news.

Almost immediately the post was being re-tweeted by dozens of people and far in excess of the usual enthusiasm for my normal posts of East German football matches or Berlin Wall shooting victims. I stayed up to argue with some people for a while (again, something I try not to do)  and then decided to shut off for the night.