If you have ever seen even a single TV documentary about the collapse of East Germany, the image of a sign with the words Wir sind ein Volk – We are one people – is unavoidable. Protestors across the German Democratic Republic began to chant the slogan Wird sind das Volk – We are the people – as a means of legitimizing their dissent against the state that claimed to rule on behalf of the people. But the turn to from das to ein Volk (so: from the people to one people) was the moment when demonstrations in the streets veered from reform within East Germany towards reunification with West Germany. 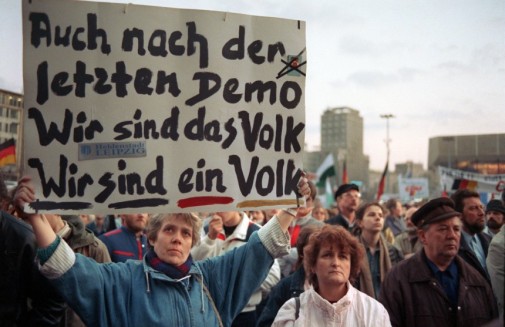 The reunification of Germany is now just a fact of geography and it is often hard to recall how threatening the concept was to so many in 1989. Framed as a rebellion against totalitarian communism, the idea of reuniting the Volk has been neutralized of its heavy historical baggage: namely the the Nazi slogan – Ein Volk, Ein Reich, Ein Führer.

The idea of the German Volk predated the Nazis, but this particular vision of it the took the logic of a racialized nationalism to the genocidal extreme. The Volk of the Nazis was a racially pure German people, purged of foreign and “degenerate” influences, both genetic and cultural. Those who were not of the Volk were to be sterilized, displaced and murdered. Genocide was the endpoint of the logic of the Volk.

And it is this dark history that makes Angela Merkel’s commentary this week on the German Volk so meaningful:

“The time of German unity, the time when the Iron Curtain fell, the time when Europe was coming together, was a wonderful time. And therefore there is no justification to presume to define out of our society small groups, to define who the Volk is. The Volk is everyone who lives in this country.”

This is a big deal. A really big deal, in fact. It was controversial when former German President Christian Wulff said that “Islam belongs to Germany” in 2010. Merkel defended Wulff on the grounds that while German  culture was grounded in Judaeo-christian values, Muslims were citizens and equal before the law. This was not a ringing endorsement so much as an acknowledgement of legal realities.

In January, Merkel had already edged towards this line of thought saying “We are all the Volk,” but she had not committed to a cosmopolitan vision of German national identity to such an extent. Here – at a CDU party election in Mecklenburg-Vorpommern (not necessarily an friendly audience for this message) – she was trying to link the idea of the Volk to a civic national identity rooted in shared residence in Germany, and explicitly rejected the notion of the Volk grounded in racial or ethnic identity.

The idea of a German civic identity is not new – Jürgen Habermas’s idea of a constitutional patriotism as a replacement for ethnic nationalism is a famous example – but this positive declaration that everyone who lives in Germany belongs to the Volk is something new.