At the beginning of the 21st century, the United Nations Office on Drugs and Crime oversaw a complex network of international conventions that aimed to combat narcotics smuggling and the illicit trade in arms, and human trafficking for purposes of exploitation. Today, law enforcement organizations argue that these three fields are fundamentally linked together by transnational organized crime to support their demands for global police cooperation. At the beginning of the century however, when activists and diplomats first created prohibition regimes aimed at addressing these issues, they understood them as distinctly separate problems, each requiring radically different solutions. In the early 20th century, international drug control initially stemmed from lobbying by missionaries concerned about widespread addiction in China due to legal traffic in opium. Controls on small arms were sparked by imperial fears that unrestricted trade could destabilize colonial rule. ‘White slavery’ was seen as a radically new problem, distinct from other forms of forced labour, in which individual pimps lured European girls and women abroad to exploiting their sexual labor for profit.

This conference aims to answer the question: How did the trafficking in humans, arms and narcotics become entangled over the long 20th century – in terms of actual illicit flows of people, guns and drugs, but also in terms of public perceptions and prohibition regimes?

The conference is looking for papers that will address themes including:

END_OF_DOCUMENT_TOKEN_TO_BE_REPLACED

In general “we will examine a series of themes centring on geopolitics, the creation and contestation of borders, the establishment of international norms, environmental questions, and the transnational flow of people, ideas, and illicit goods. We aim to discuss the overlapping alignments and realignments on the global, regional, and local level, taking into account the superpowers, other external states, and African governments, but also non-state actors including international organisations such as the UN and Organisation of African Unity (OAU), international NGOs, opposition groups, and members of the civil society.”

You can read more about the event here: Africa and the Cold War III

If you have ever seen even a single TV documentary about the collapse of East Germany, the image of a sign with the words Wir sind ein Volk – We are one people – is unavoidable. Protestors across the German Democratic Republic began to chant the slogan Wird sind das Volk – We are the people – as a means of legitimizing their dissent against the state that claimed to rule on behalf of the people. But the turn to from das to ein Volk (so: from the people to one people) was the moment when demonstrations in the streets veered from reform within East Germany towards reunification with West Germany.

The reunification of Germany is now just a fact of geography and it is often hard to recall how threatening the concept was to so many in 1989. Framed as a rebellion against totalitarian communism, the idea of reuniting the Volk has been neutralized of its heavy historical baggage: namely the the Nazi slogan – Ein Volk, Ein Reich, Ein Führer.

The idea of the German Volk predated the Nazis, but this particular vision of it the took the logic of a racialized nationalism to the genocidal extreme. The Volk of the Nazis was a racially pure German people, purged of foreign and “degenerate” influences, both genetic and cultural. Those who were not of the Volk were to be sterilized, displaced and murdered. Genocide was the endpoint of the logic of the Volk.

And it is this dark history that makes Angela Merkel’s commentary this week on the German Volk so meaningful:

“The time of German unity, the time when the Iron Curtain fell, the time when Europe was coming together, was a wonderful time. And therefore there is no justification to presume to define out of our society small groups, to define who the Volk is. The Volk is everyone who lives in this country.”

This is a big deal. A really big deal, in fact. It was controversial when former German President Christian Wulff said that “Islam belongs to Germany” in 2010. Merkel defended Wulff on the grounds that while German  culture was grounded in Judaeo-christian values, Muslims were citizens and equal before the law. This was not a ringing endorsement so much as an acknowledgement of legal realities.

In January, Merkel had already edged towards this line of thought saying “We are all the Volk,” but she had not committed to a cosmopolitan vision of German national identity to such an extent. Here – at a CDU party election in Mecklenburg-Vorpommern (not necessarily an friendly audience for this message) – she was trying to link the idea of the Volk to a civic national identity rooted in shared residence in Germany, and explicitly rejected the notion of the Volk grounded in racial or ethnic identity.

The idea of a German civic identity is not new – Jürgen Habermas’s idea of a constitutional patriotism as a replacement for ethnic nationalism is a famous example – but this positive declaration that everyone who lives in Germany belongs to the Volk is something new.

END_OF_DOCUMENT_TOKEN_TO_BE_REPLACED

Between the acute refugee crisis in Europe and the perpetual crisis that is the academic job market, I’ve been thinking about my strange personal position as an economic migrant. I haven’t had to endure a death-defying trip across the Mediterranean, I have yet to face any xenophobia directed towards me personally, and compared to the vast majority, my bureaucratic hassles have been minor. In search of a better life, I left Canada for graduate school in the United States when I was unable to gain entry in my homeland. After several years in Germany doing research towards my doctorate I was then able to find employment as a post-doc in England.

Even among those welcoming refugees, “economic migrants” often serve as the greedy, dark other to those virtuously fleeing conflict. But when we look a certain way, sound a certain way, and carry the right kind of visas and passports, we tend to fly under the radar. As a white Anglo-Canadian, perhaps the most innocuous-seeming of all national identities, it’s been pretty easy to be an economic migrant really. In the US, an administrator waved off a requirement that I as a foreign student get a TB test before enrolling: “You’re not that kind of foreign.” Another told me, “you don’t look like a foreign student. Don’t sound like one neither.” It was meant to be a compliment. I was able to stick around Berlin well past my initial visiting scholar visa because I got married to someone with a German passport [and she had enough money to pay for the legally required 22sqm per person apartment]. My ability to work in Great Britain stemmed from an Ancestry Visa: my grandfather Walter, born in Scotland before he departed for the new world (his family economic migrants themselves), made me eligible for a five year work permit.

Now my peripatetic life over the past decade at first seems like a set of specific choices from the outside, but really it has been a matter of professional survival. I went to the USA for my education because they offered to pay for it when no one back home would. I moved to England for a job because they decided to hire me and I didn’t have any other offers. I’d like to claim I have a grand strategy guiding my career, but the Babylonian Lottery that is the academic system rarely allows for this: At the end of a 14-month research trip funded by the German government, I was rejected by a Canadian funding agency on the grounds that I did not have the skills to actually conduct my planned research. While I was still a PhD student, I was able to get an on-campus interview for a tenure track position at an American university that had only four years earlier rejected me for a spot as a doctoral student. When the smallest of margins can decide whether you get to progress further or are chucked out of the system, the extra options I’ve had due to sheer luck have let me survive (so far).

END_OF_DOCUMENT_TOKEN_TO_BE_REPLACED

On August 24, 1961, Günter Litfin was shot to death by East German transport police as he tried to cross the border to West Berlin. A tailor from Weissensee, the 24-year-old Litfin had climbed over the Berlin Wall, built only 11 days earlier, near the Charité Hospital. Police fired warning shots at Litfin while he was on solid ground, but once he jumped into the Humboldt Harbour and began swimming for West Berlin, they took proper aim and hit their target. His corpse was pulled from the water a few hours later by East German firefighters.

Early in the morning of February 6, 1989, Chris Gueffroy became the last person to be shot to death while crossing the Berlin Wall. The 20-year-old waiter decided to leave East Germany on the cusp of being conscripted into the National People’s Army. With his friend Christian Gaudian, Gueffroy hoped to cross the Britz Canal to the West Berlin district of Neukölln – they erroneously believed that the order to use deadly force at the border had been suspended. Border guards opened fire on the pair as they scaled the final layer of border fencing. Gueffroy was hit twice in the chest and died immediately.

Litfin and Gueffroy are often mistakenly referred to as the first and last victims of the Berlin Wall, but this sad distinction actually belongs to two others. The 58-year-old widow Ida Siekmann died of injuries from jumping from a building on Bernauerstrasse to cross the Wall two days before Litfin was shot. At the other end, Winfried Freudenberg was killed over a month later than Gueffroy when his makeshift balloon failed during the border crossing and he fatally crashed in the West Berlin suburb of Zehlendorf.

This error is important, not for the sake of historical pedantry, but because it speaks to how the Berlin Wall is understood in the popular imagination. When we think of the Berlin Wall, the imagined victim is usually a young man, gunned down by border guards as he fled for freedom. The most famous of all the Berlin Wall victims, Peter Fechter, embodies this image. Fechter, 18, was shot as he tried to cross the border near Checkpoint Charlie in 1962, little more than a year after the Wall’s construction. He lay wounded and screaming in pain in the death strip for forty minutes until he bled to death. His monument on Zimmerstrasse eulogizes his plight: “…he only wanted freedom.” 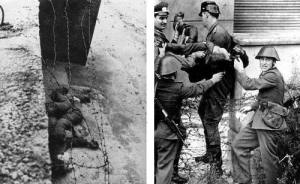