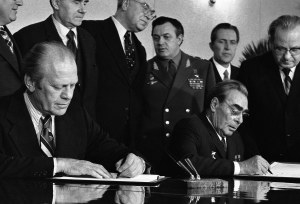 Forty years ago today, 35 countries from both sides of the Iron Curtain signed the Helsinki Accords – the final act of the Conference on Security and Co-operation in Europe. Since the end of the Cold War, this agreement has been held up as a crucial turning point in the modern history of human rights. Academic and journalistic accounts often cite the Helsinki Accords as a breakthrough moment when communist states in the Eastern Bloc first accepted the principles of human rights. It is, thus hailed as the inspiration for the wave of human rights activism that culminated with the revolutions of 1989. This fatal decision by the leaders of the Eastern Bloc to sign on to an agreement with significant human rights provisions has been explained as an act of hubris, cynicism or some combination thereof. According to these narratives, wily diplomacy on the part of the West pressured the leaders of the Soviet Union and its satellites to sign its own death warrant by agreeing to respect rights they were obviously violating.

In the broader history of human rights in the Eastern Bloc, however, it becomes harder to draw a straight line of connection from the diplomacy of 1975 to the collapse of European state socialism in 1989/91. First, the Helsinki Accords were not the first instance in which communist states had recognized human rights. Second, while the human rights provisions of the Helsinki Accords were fiercely argued over, they were not simply imposed by the West on a recalcitrant East. Third, while the agreement provided fodder for dissidents, it was one of many human rights documents cited by activists rather than a singular catalyst for change.

While many cite the earlier abstention by the socialist bloc on the vote for the Universal Declaration of Human Rights in 1948 as evidence of the Eastern Bloc’s rejection of human rights overall, this is a mistake. Already in the 1950s, communist states were invoking human rights rhetorically to attack Western colonialism and show solidarity with the emerging Third World. By 1968, the entirety of the Eastern Bloc had either signed or publically affirmed the UN’s International Covenant on Civil and Political Rights. In comparison with the West, the United Kingdom, Italy, and West Germany similarly endorsed the Covenant, but others were far more reticent: Canada signed in 1976, the USA in 1977 and France in 1980.

In the early 1970s, communist states were confident that human rights were on their side in the international arena, and it appeared to many in the West agreed. In 1973, one conservative observer from West Germany concluded,

“With the change in majorities in the bodies of world organizations – particularly in the [UN] General Assembly – the socialist states have recognized the possibility of the politicization of human rights, and the free world has almost cleared off the field without a fight.” [1]

The Helsinki Accords were an important step in linking security and human rights and reinforcing earlier agreements, but it was not a great ideological retreat by communist leaders.

Archival sources from the Eastern Bloc negotiators also cast doubt as to the idea that human rights provisions were imposed by the West. European delegates certainly demanded their inclusion, but Eastern objections centered primarily on what kind of human rights would be included. East German negotiators, the most hard-line of all, actually saw no problem with human rights language in the treaty so long as it remained tied to the UN Covenants. Even on the very touchy subject of religious freedom the East German Politburo decided that “a reference to the UN Covenants on Civil and Political Rights and on Social, Economic and Cultural Rights, to which the GDR belongs, in connection with this principle is possible.” [2]

Delegates from the communist side did fear that the West would seek to use human rights provisions as a pretext for intervention, but ultimately believed the final product would actually strengthen their claims to sovereignty. International human rights politics in the decade leading up to 1975 had centered on demands for self-determination from the Third World. Self-determination was in Article 1 of both UN human rights covenants and was closely associated with the realization of sovereignty in the face of Western imperialism. In the final text of the Helsinki Accords, “Respect for human rights and fundamental freedoms,” Principle VII, was placed between “Principle VI Non-intervention in internal affairs” and “Principle VIII Equal rights and self-determination of peoples” both of which contained prohibitions on interference in domestic affairs of the signatories. In this context, Eastern Bloc leaders believed they had triumphed by ensuring that a non-imperialist vision of human rights was central to the Accords.

The links between the Helsinki Accords, human rights activism and 1989 are likewise tenuous. In the wake of the agreement, several Helsinki Monitoring groups sprang up across the Soviet Union and in some Eastern European nations. Charter 77 of Czechoslovakia and KOR in Poland were also founded in the late 1970s. Yet, the correlation is problematic in both directions: a small human rights movement had already begun in the USSR in 1968 while in the East Germany, Romania and Bulgaria there would be no independent human rights groups until the mid to late 1980s. Dissidents cited the Helsinki Accords, but they also cited domestic constitutions, the UN Charter of 1945, the UDHR, and the UN Human Rights Covenants of 1966. Helsinki was one element in the mix, but it was not the prime mover of Eastern European revolution.

The point here is not that the Helsinki Accords were unimportant, but that the triumphalist narratives linking them to the inevitable collapse of state-socialism are seriously flawed. The Helsinki Accords were an important part of Cold War diplomacy and helped to legitimize various dissident movements. The elevation of the agreement as the watershed moment in modern human rights history, however, reduces complex processes of social and political change to a simplistic vision of self-evident truth triumphing over the hypocrisy of communism.