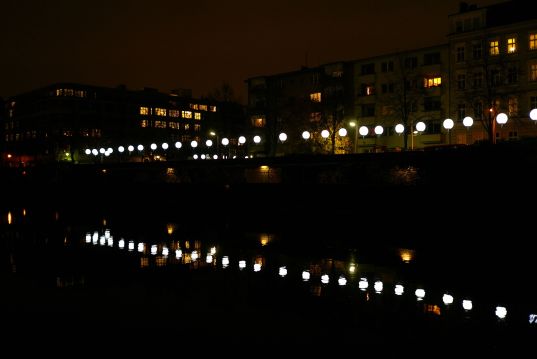 The Lichtgrenze commemorating the 25th anniversary of the opening of the Berlin Wall- November 9, 2014.

From our perspective today, it is easy to see November 9, 1989 as the end of the German Democratic Republic. In most of the coverage of the anniversaries, that date is synonymous with the fall of the Berlin Wall, the collapse of monopoly rule by the Socialist Unity Party (SED) and the end of the feared Ministry of State Security, the Stasi. In retrospect, it is clear that the opening of the Berlin Wall on November 9 was a decisive breaking point, after which the SED could never recover its capacity to rule.

But on November 10, 1989, this was far from obvious for all involved. In the early hours that day it was still unclear what exactly had happened overnight. SED officials still believed they could re-impose controls on cross border travel. The Soviet Union had yet to comment on the events or indicate if it would intervene. While earlier mass protests had been tolerated, Egon Krenz, leader of the SED since late October when he had deposed Erich Honecker, had praised the violent crackdown at Tiananmen Square earlier in the year leading some to fear violence could still come. That the opening of the border would usher in a peaceful transition to pluralistic democracy and later reunification was hardly certain.

While most of the photographs from the Mauerfall concentrate on the crowds overwhelming the border checkpoints and the jubilant celebrations in West Berlin, this shot provides an interesting contrast: 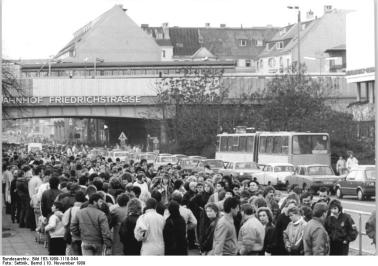 East Germans in line to travel to West Berlin at the Friedrichstrasse Border Crossing. November 10, 1989.

On the East German side during the daytime on November 10, the crowd was in an orderly queue awaiting the chance to travel to the West. While the Berlin Wall had opened, traffic was limited to a handful of official crossings still under the nominal control of the East German border guards. Many sought to visit West Berlin immediately given the possibility that their chance to do so could be short-lived.

While the Berlin Wall officially fell that evening on November 9, 1989, it was months before it truly disappeared as an impediment to travel. East Germans were able to freely travel to the West, but West Germans continued need a visa and were still required to exchange a minimum amount of currency to gain entry to the GDR. Only on December 22 did visa free travel become possible in either direction for citizens of both countries. Finally, on July 1, 1990, the same day as the currency union between East and West Germany went into effect, border controls ceased entirely. 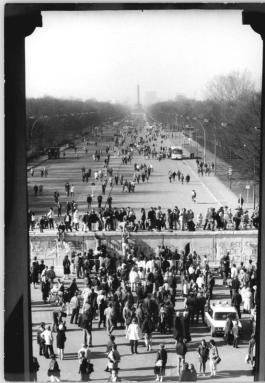 The Berlin Wall still standing, but more of a hassle than an “Anti-Fascist Protection Rampart” as it was called by the SED. February 1990.

In the weeks following the opening of the Berlin Wall, the thousands chipping away at its surface for souvenirs around famous spots like Checkpoint Charlie did some damage, but the reinforced concrete barrier continued to encircle most of West Berlin. A handful of new border checkpoints were opened to accommodate the increase of traffic and full slabs of the wall began to be taken down beginning in January 1990 so that they could be sold off and the funds used to deal with the ongoing economic crisis. The next month, the National People’s Army dismantled the Wall near to the Brandenburg Gates. Finally, on June 13, 1990, the military officially began the operation to demolish the whole of the Berlin Wall piece by piece. The job would not be completed until November 1991, more than a year after reunification.

East German soldiers peering through a hole in the Berlin Wall. April 1990.

On a political level, the SED’s legitimacy and capacity to rule was fatally damaged with the opening of the Wall, but here too, the transition came in a series of steps, rather than one revolutionary swoop. SED leader Egon Krenz initially thought that even with the opening of the Wall, he would be able to manage a reformist path from above without relinquishing power himself. Mass popular protests, however, continued daily for weeks after November 9th. The famous Monday Demonstrations in Leipzig that were so crucial in mobilizing the population in the fall of 1989 would continue well into the spring of the following year. Four days after the fall of the Berlin Wall, Hans Modrow, the reformist party chair from Dresden took over the office of Prime Minister from the geriatric Willi Stoph. Power quickly shifted from the leadership of the SED party apparatus to the SED-led National Front government, which had until then served a distinctly subordinate and largely symbolic role.

On December 1, the special position of the SED as constitutionally guaranteed leading party of East Germany was abolished. Four days later, SED leader Egon Krenz was forced to resign all of his positions having survived 50 tumultuous days as head of the GDR. On December 7, the Central Round Table was formed with representatives of the dissident and civic movements meeting with SED officials to negotiate the transition to democracy. The elections for the first (and as it turned out last) democratic government of the German Democratic Republic, were not held until March 18, 1990.

The abolition of the Ministry for State Security, the Stasi, also dragged out over the weeks following the opening of the Berlin Wall. In an effort at rebranding, the Stasi was renamed the Office of National Security on November 17 and the following day, the much reviled head of the Stasi, Erich Mielke, was removed from duty. On December 7, Mielke was arrested on charges of misappropriating state funds. Senior officers hoped that with the new name (which had the unfortunate short form of NaSi in German) and the removal of Mielke, they could survive the opening of the Wall. Press accounts of SED crimes and popular anger towards the repressive security services soon put an end to these plans. On December 4, protesters stormed NaSi offices in the Erfurt and Leipzig when agents began burning documents and destroying evidence of Stasi crimes.

The Central Round Table sent directives first disarming the security services headquarters on January 11, 1990 and finally dissolving the remnants of the organization two days later. While the People’s Police and dissident groups oversaw the removal of the extensive arsenal at the Normannenstrasse headquarters of Stasi, the the massive collection of records created over the life of the GDR were still in the hands of the former agents. On January 15, a demonstration against the security services organized by the civic group New Forum spun out of control and protesters overran the guards to occupy what had been the heart of Stasi power. The occupation stopped the agents from further destroying files, but only after around 45 million pages had been shredded or burned. Demonstrators set out through the massive complex simultaneously vandalizing offices and preserving the still vast remaining collection of documents.

The longer history of the fall of the Berlin Wall is important because without it, we leave out the actions of those who made in happen on the ground. Too often, the efforts of the dissidents, activists and protesters that shaped the political transition after the euphoria of November 9 are omitted from commemorations. The constant political pressure from the civic groups and the people in the streets pushed forward change in the weeks following November 9. While today it is clear that SED rule was finished, the protesters who continued to demand the right to travel at the border and occupied Stasi offices did not. By ending the story with the opening of the Berlin Wall on November 9, we are forgetting their actions and obscuring the beginning of a new chapter in German democratic politics.

5 thoughts on “Both an End and a Beginning: The Long Fall of the Berlin Wall”