East German postage stamp commemorating 25 years of the “Anti-Fascist Defense Rampart” or as it is better known, the Berlin Wall.

Some spoilers for the first four episodes of Deutschland 83 as well as the general plot points of the films The Lives of Others and Bridge of Spies.

The voice of Ronald Reagan ominously calling the Soviet Union an Evil Empire opens the new television series Deutschland 83, but our perspective as the viewer comes from the woman listening: Stasi agent Lenora Rauch. She sees the speech as an open threat of war and a dire warning of imminent attack by the West. Rauch’s (Maria Shrader) interpretation is shared by her colleagues in the German Democratic Republic’s intelligence services who also see Reagan’s bellicose rhetoric as the first step toward nuclear war. Throughout the whole series, the driving force of the narrative is the quest of Martin Rauch (Jonas Nay) – Lenora’s young nephew – to find proof of this impending attack and eventually to prevent an all out atomic conflagration. 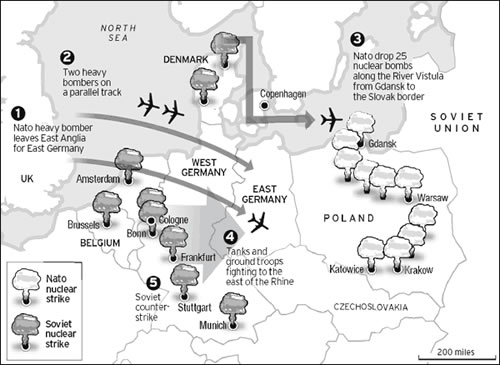 Anticipated nuclear strikes in Central Europe according to Warsaw Pact military exercise “7 Days to the River Rhine” held in 1979.

What is remarkable about this series, is its willingness to stake the plot around the worldview of the Stasi. Rather than portraying Rauch and her colleagues as war-hungry paranoiacs,  their fears are treated as the logical outcome of ideology, Cold War tensions, and American saber-rattling. The series does not take the side of the Stasi, but it demands that the viewer takes it seriously and engages with a perspective in which the communist bloc is existentially threatened by the ever-present danger of western capitalist imperialism. Deutschland 83 does not shy away from showing the horrific actions perpetrated by the security services from censorship to arbitrary detention to murder, but it never reduces the Stasi to cartoon villains or mindless sadists. These are professional agents who see themselves as defending their nation against invasion and destruction and they will stop at nothing to prevent this.

For the Stasi, East Germany was a country besieged by the forces of Western imperialism. The popular uprising that took place across the GDR in 1953 convinced security officials that their fears of open Western intervention were justified. For the Stasi, the June 17th Uprising was the long anticipated “Day X,” when fascist forces mobilized to destroy East German socialism. Elites in East Berlin saw the construction of the Wall in 1961 as a means to prevent Western sabotage and interventionism into East German affairs (in addition of course to stemming the mass emigration that was undermining the state’s viability). Internally it was called the “Anti-Fascist Defense Rampart,” to reinforce its supposed necessity against the machinations of the West. In the early 1980s, when NATO sought to place medium range Pershing missiles in West Germany in order to counter Soviet SS-20 missiles deployed to Eastern Europe, this was seen as a possible move to enable a first strike in a nuclear war. 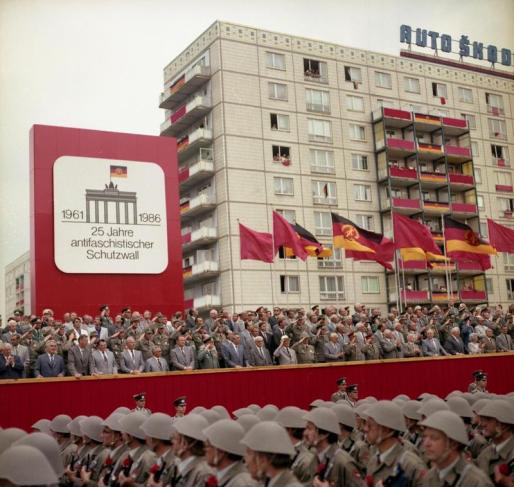 Military parade in East Berlin celebrating 25 years of the “Anti-Fascist Defense Rampart” in 1986.

A 1963 East German film, For Eyes Only, echoes the plot of Deutschland 83, but in this case the invasion was actually going to take place. A Stasi operative pretends to escape to the West as a civilian and infiltrates the West German Military Intelligence Division. There he uncovers plans for a NATO attack, which he successfully smuggles back to East Germany, thus foiling the plan. The film was promoted as a fictionalized version of recent events both blaming the 1953 uprising on outside agitation and legitimizing the Berlin Wall as a means of defending against the planned aggression.

Fiction dealing with East Germany and the Stasi in recent years hasn’t been willing to take such chances. Although the film The Lives of Others had Ulrich Mühe playing an Stasi agent as the protagonist, he is rapidly disenchanted with the abuses of the system (as though they would be a shock to a veteran agent in the 1980s) and he ends up becoming a guardian angel to the target of his surveillance. The idealistic playwright who he observes, played by Sebastian Koch, is equally disillusioned by “real existing socialism” and seeks to expose the horrors of the GDR. Aside from these tragic heroes, we have the boorish and corrupt Minister of Culture who extorts sex from the doomed heroine of the film and quotes Stalin at parties in case we weren’t completely clear he was the villain. And there is the equally corrupt head Stasi officer, whose petty bullying and gleeful philistinism is elevated above a mustache-twirling villain only by a stellar performance by Ulrich Tukur. While providing a leading role from the ranks of the East German secret police, the audience is only forced to accept such unpalatable protagonist for a short while before the power of art convinces Mühe’s Stasi agent to sabotage his own investigation.

The German television series Weissensee similarly puts a member of the state security services in the lead, but makes his rebellion into the central focus of the narrative. Described as “Romeo and Juliet” in East Germany, Weissensee follows a romance between the daughter of a famous dissident singer and a member of the Volkspolizei whose family are senior figures in the Stasi. The young policeman (Florian Lukas) is forced to challenge both the demands of his family and his job in order to pursue the woman he loves (Hannah Herzsprung) and we are meant to identify with his rebellion rather than empathize with the imperatives of his position within the state apparatus.

The recent film Bridge of Spies makes for an interesting contrast in perspectives: unlike earlier works which tend to show the communist world as an opaque unified monolith, the film shows the competing interests and complex intrigue that took place amongst allied socialist states during the Cold War. At the same time, the viewer is always approaching the Eastern Bloc as an outsider, following the steps of Tom Hanks’s character as he pieces together clues from a shadowy and often absurdist bureaucracy. While at times menacing, the Soviet officials and East German spy-trading lawyer Wolfgang Vogel (again Sebastian Koch) are portrayed sympathetically, but the viewer is always engaged with these characters from the perspective of the interloping American.

Rather than showing the parallel machinations on both sides of the Iron Curtain, Bridge of Spies firmly roots the narrative in the story of one American’s quest to uphold the values of liberal democracy and the rule of law. The view of the Cold War is more nuanced than most films and contains probably some of the best absurdist takes on the superpower struggle since Dr. Strangelove or the sublime One, Two, Three. In the end, however, Bridge of Spies remains a celebration of the true spirit of America, embodied by a noble hero fighting for justice, even at the cost of his own family’s safety, surrounded on all sides by those who would embrace prejudice and bigotry. Essentially it’s To Kill a Mockingbird mixed with The Spy who Came in From the Cold.

A surreal negotiation at the Hotel Potemkin in East Berlin from One, Two, Three (1961), director Billy Wilder.

All of this is a valid choice for both director Stephen Spielberg and the Coen brothers who penned the script. But, it shows how much of a leap the Wingers have taken with Deutschland 83 by orienting the narrative around the worldview of the Stasi and the fear of an imminent Western attack. The East German officers are not shown to be ridiculous in their expectation of a NATO assault, but rather following an understandable, if completely wrong, line of reasoning. There is no Tom Hanks figure to gently guide the viewer towards the right and proper moral position that is both difficult, but undoubtedly correct. There are no Western paragons of virtue, and those idealists on the liberal-democratic side of the wall who seeking to overcome the horrific logic of Mutually Assured Destruction are either secretly state agents or on the brink of drastic violence in the name of peace. Our naive protagonist is skeptical of his role, but primarily from personal reasons of loyalty to his mother and girlfriend back in the GDR. And then he cheats on the girlfriend with a woman he nearly allows to drown. So much for easy identification heroes.

Viewing the series as a historian, it’s fascinating to watch fiction finally make the effort to try to understand the internal dynamics of the GDR without either apologizing for the cruelty of the system or creating a caricature of irrational sadism. The Stasi agents we meet are intelligent and ambitious professionals, but they are not omniscient overseers. In spite of mass surveillance and infiltration, their intelligence can never overcome the prejudices, fears, and ideological convictions of the agents analyzing the data. The dispassionate portrayal of characters following the logic of their worldview to a rational, if horrific, conclusion without any kind of hand-holding or overt moralizing is refreshing in its confidence in the viewer to engage critically with a difficult era in history.

Focusing simply on denouncing the crimes of the Stasi does little beyond reinforce existing preconceptions that East Germany was a brutal dictatorship. What is far more interesting, and where Deutschland 83 pushes the boundaries of historical depiction, is to try and see how such a system, the collapse of which seems so inevitable in retrospect, was able to survive for so long. By forcing the audience to sympathize with the terrible logic of the Stasi, Deutschland 83 pushes the viewer to comprehend an alien past rather than stand smugly above it. Instead of distancing us from these figures and giving us a sense of superiority, we instead have to try and understand how someone could buy into the logic of an worldview so fully that they are willing to violate all notions of privacy, personal freedom, and even go to the brink of apocalyptic war. In doing so we have a chance to see the echoes of the past in the present, and not simply relegate institutions like the Stasi and its abuses to a safely buried past.

7 thoughts on “Sympathy for the Devil: Seeing the World Through the Eyes of the Stasi in Deutschland 83”