In Germany and around the world, the last residence of persecuted Jews and other victims of Nazi terror are marked by small brass bricks called Stolpersteine – Stumbling Stones. There are more than 70,000 of these 10 by 10 cm stones installed in cobblestoned and paved sidewalks all made by hand by the artist Gunter Demnig who began the project back in 1992. It has now become common for many in Germany to mark the 9th of November – the anniversary of Kristallnacht – and the 27th of January – Holocaust Remembrance Day on the anniversary of the Red Army’s liberation of Auschwitz – by polishing local Stolpersteine. 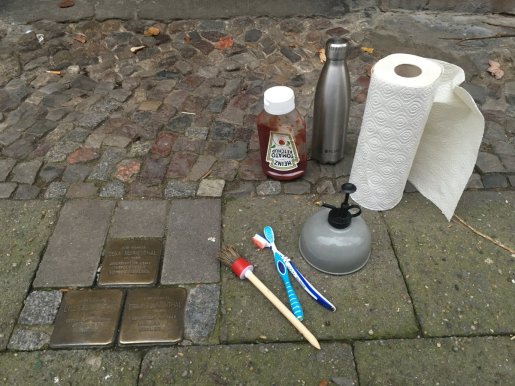 While the Stolpersteine are ubiquitous across Germany, there are a few exceptions. The city of Munich banned the installation of new Stolpersteine in 2015 after claims that they were disrespectful of the dead, whose names were walked on by the living. In Erfurt, where I now work, the Stolpersteine are not banned, but instead the last known residence of Nazi victims is marked by a DenkNadel – a memorial needle. The civic group Erfurter GeDenken called for proposals in 2007 to create a uniquely Erfurt commemoration for the victims of Nazi terror and local artist Sophie Hollmann won the competition with her design: a silver cone topped by an orange ball as if it was a giant pushpin pressed into the street to mark the spot. The first set of DenkNadel were installed on November 9, 2009 with five more installed in the following years across the city.

While the project was strongly supported by the city government, it has had its critics. The local Jewish community was not enthusiastic about the look of the DenkNadel when the designs were first released and its look has continued to attracted criticism. While the design was more clearly a pin, in execution, the DenkNadel have been said to resemble a Zuckertüte  – a cone of candy traditionally given to children at the start of the school year in German. One person summed up the pros and cons in a Trip Advisor review: “On the one hand you can find the sites much better than in other cities, on the other hand, the design chosen bears a fatal resemblance to a promotion for an ice cream parlor.”  Not only that, while a Stolperstein costs 120 Euro, each DenkNadel costs over 1800! 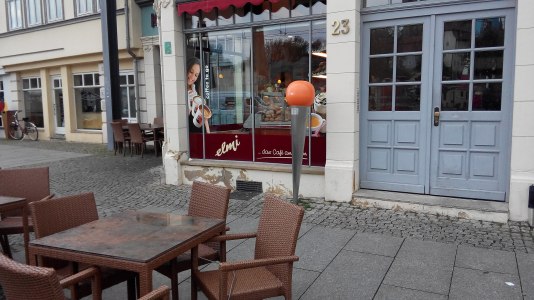 DenkNadel at Domplatz 23 in Erfurt commemorating Günther Beer deported to the Ghetto Belzyce on May 9, 1942.

Creating memorials for such a horrific event as the Holocaust is not an easy matter – the Central Monument to the Murdered Jews of Europe in Berlin spent years in the planning phases as competitions were held and results thrown out for being insensitive; aesthetically, politically, or culturally. One rejected proposal for the monument in Berlin was a Ferris Wheel made up of cattle cars like those used in the deportations to the death camps. While the artist meant to force the viewer (and rider) to engage with an absurd and macabre vision of the Holocaust, every student I’ve encountered has found it revolting and tasteless. The Stolperstein project has been almost miraculously popular given the controversy that surrounds almost every Holocaust monument and trying to do something original that appeared to copy its concept, but remaking its form was a risky move. The critiques of the DenkNadel are less representative of a failure of civic engagement, but rather a reminder of just how difficult it is to create a memorial that can evoke near universal praise.